Botox® has helped millions of people achieve freedom from crow’s feet and frown lines, without the discomfort or inconvenience of surgery. Botox®, and similar compounds like Dysport® and Xeomin®, temporarily relax the small muscle groups that cause wrinkles. This family of related compounds is collectively known as neuromodulators and, when handled correctly, they’re one of the world’s safest anti-aging treatments. At her plastic surgery practice, Dr. Malena Amato uses her skill and training as an oculoplastic surgeon to produce excellent results for Botox®, Dysport®, and Xeomin® in Austin, TX.

How do Botox®, Dysport®, and Xeomin® Work?

Neuromodulators work by blocking nerve signals in specific problem areas. After these signals are blocked, the muscles in those areas remain relaxed, even when the patient smiles or frowns. This smooths dynamic wrinkles like crow’s feet and frown lines (wrinkles that only appear when the face is in motion). Neuromodulators and dermal fillers are often used together because fillers can tissue volume loss for an overall rejuvenated aesthetic. The effects of neuromodulators last about three months before wearing off. However, if you like the results of your treatment, you can choose to maintain your new look with another round of injections. Repeated neuromodulator injections gradually train the muscles to stay relaxed, so after a couple of treatments, you’ll only need to have Botox® injections twice per year. Repeated doses have also been shown to reduce stress on the skin (by preventing repeated stretching and creasing), potentially slowing the formation of static wrinkles in treated areas.

Learn more about the Georgetown and Stanford alumna and why you should visit Dr. Amato for your next procedure.

Does Getting Botox® Hurt?

No. The needles used to administer Botox®, Dysport®, and Xeomin® are very fine, so they don’t cause significant discomfort. If you’re worried about pain, Dr. Amato will numb your skin with a local anesthetic cream before making any injections. After your appointment, you’ll be able to resume all your normal activities. 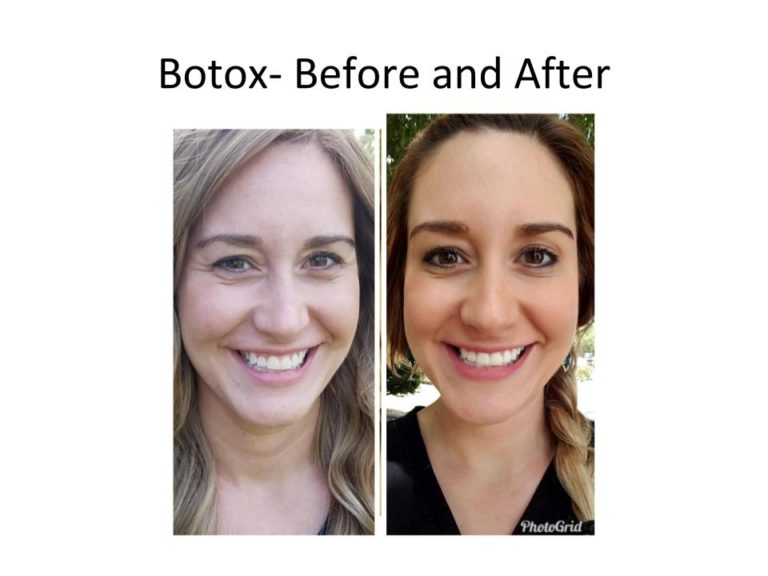 What’s the Difference Between Botox®, Dysport®, and Xeomin®?

Botox®, Dysport®, and Xeomin® are all derived from the same basic compound, so they’re very similar in how they work. Dysport® creates somewhat more diffuse results, so it may be more useful for treating larger areas with many fine lines, whereas Botox® is excellent at targeting specific wrinkles. Xeomin® is unique in that it contains the active ingredient that makes neuromodulators work, without any additives. Some researchers think that using a single component could prevent the body from developing a resistance to neuromodulators (a rare side effect of repeated injections). Ultimately, the best choice is the one you’re most comfortable with; some people prefer Botox® because it has a long history of use, while others want to try newer compounds.

Ready to book your procedure?

If you are ready to take the next steps, or simply want more information about a procedure, please contact our team! Dr. Amato is looking forward to speaking with you soon!

Why is an Oculoplastic Surgeon a Good Choice for Botox® Injections?

Though neuromodulators are very low-risk, injecting them without due care can create unwanted side effects. When too much Botox® is inserted, or it’s injected into the wrong muscle groups, patients can end up with a “frozen” look. Improper Botox® injection techniques can also lead to temporarily droopy brows or eyelids and ocular pain. Oculoplastic surgeons undergo rigorous training that gives them a thorough understanding of the anatomy of the orbital region. As such, they’re able to precisely target only the muscles that cause wrinkles, while avoiding the muscle groups that allow you to frown and blink, among other facial movements. Oculoplastic surgeons are the safest choice and uniquely equipped to produce superior neuromodulator results, especially when treating fine lines around the eyes.

Who Makes a Good Candidate for Botox® Injections?

Most people can have Botox®, Dysport®, or Xeomin® injections. Neuromodulators have been used for over two decades without being linked to adverse health effects, and even allergic reactions to these compounds are rare. Generally, only those with bleeding disorders, compromised immune systems, multiple severe allergies, or other health conditions are advised to avoid these compounds. Botox® should also be avoided if you’re pregnant or nursing.

Neuromodulators work best as a standalone treatment on younger patients (those between the ages of 30-45). Mature patients usually benefit more from treatment plans that combine injectables with surgery, as only surgery can correct skin and muscle laxity. If you’re over 50, Dr. Amato may suggest that you also undergo brow lift and eyelid surgery to create more dramatic results. She uses endoscopic surgical methods wherever possible to minimize discomfort and shorten healing time.

With over 17 years of experience performing oculoplastic surgery, Dr. Malena Amato is one of Austin’s leading Botox® injectors. Her thoughtful touch can eliminate crow’s feet and forehead lines while preserving an elegant, natural look. To learn more about Botox®, Dysport®, and Xeomin®, contact her online or by phone to arrange a personal consultation.

What Areas of the Face Can Be Treated with Botox?

Botox can be used to treat lines and wrinkles on a number of different areas of the face, including the forehead, eye area (crow’s feet), and lips. It can also be used to soften the appearance of dimpling on the chin. Botox is often injected into the jaw muscles to help alleviate the painful symptoms of TMJ associated with teeth grinding and in the forehead to treat symptoms of migraines.

Botox treatments with Dr. Amato are quick with minimal discomfort. This treatment requires zero anesthesia or recovery time. Many people choose to have their treatments done during their lunch break from work. Most patients experience a small amount of discomfort during the injection process. However, if you prefer, Dr. Amato can provide a topical anesthetic to numb the skin and ease any discomfort throughout the duration of your treatment.

How Soon Until I See the Results of My Botox Treatment?

Each patient’s experience differs; it usually takes around 3-5 days to see the effects of Botox. For some, it may take up to two weeks to see the final effects.

How Long Does the Results of Botox Last?

Botox results typically last 3-5 months from the date of injection. Over time, the body does metabolize the Botox, leading to the slow return of muscle movement in the treated area. Patients do have the option of maintaining their Botox results with a periodic maintenance treatment every 3-4 months.

What is the Difference Between Botox and Other Neuromodulators like Dysport and Xeomin?

Botox vs Dysport: Dysport is a neuromodulator, like Botox, that’s derived from the botulinum toxin and works by temporarily inhibiting muscle causing wrinkles. The one important distinction between Botox and Dysport is they are dosed differently. It requires three units of Dysport to equal the muscle relaxing strength of one unit of Botox. Also, Dysport is diluted differently than Botox. This doesn’t mean that Dysport is less effective than Botox; it just means that a high quantity of Dysport might be needed to achieve the same level of results.

Botox vs. Xeomin: The main difference between Xeomin and Botox has to do with formulation. Xeomin is a “pure” neurotoxin. That is, Xeomin contains only a single ingredient (botulinum toxin A), while the formulation of Botox includes various proteins clustered around the active molecule. The benefits of Xeomin’s pure form means users have a lower chance of developing the antibodies that lead to a resistance that can limit its effects.

Also, while the results of both treatments last for the amount of time (3-6 months), Xeomin requires up to 4 days for results to take full effect, while Botox typically only requires about 72 hours.